“Theories change, but the authentic material remains” (from a speech delivered at the National Jonas Basanavičius Award ceremony in 1994). 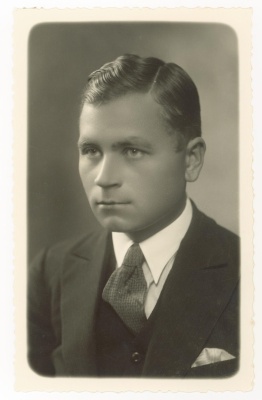 The Lithuanian Folklore Archive was established in 1935 in the temporary capital of Lithuania, Kaunas. This occurred somewhat later than in other Baltic countries (Latvian Folklore Archive was established in 1924, and the Estonian Folklore Archive in 1927), and its first director was Dr. Jonas Balys. As Jadvyga Čiurlionytė recalls, he was “energetic, demanding, and organized, yet had a somewhat rough character that was balanced out by his exceptional love for his chosen profession.” (Jadvyga Čiurlionytė. Edited by Laima Burkšaitienė. Vilnius: LMTA, 2006, p. 270).

J. Balys was born on July 2, 1909 in the homestead of Krasnava in the Kupiškis district. While still studying at the Panevežys Seminary for Teachers he started to collect folklore of the Kupiškis region. He studied at universities in Kaunas, Graz, and Vienna (he received his Ph.D. from the latter in 1933), and later had an internship in Helsinki. In 1935 he became the director of the Lithuanian Folklore Archive. The archive was established in Kaunas as a modern research center which engaged in gathering folklore manuscripts and sound recordings, writing academic works, and publishing the periodical Tautosakos darbai / Folklore Studies. In 1936 J. Balys published the Catalogue of Motifs in Lithuanian Spoken Folklore that was based on the systematizing principles of Antti Aarne, and in 1939 he published the study Thunder and the Devil in the Folklore of Balto-Nordic Countries. In 1944 he fled to Germany, and in 1948 moved to the US and began work as the assistant of the famous American folklorist Stith Thompson at Indiana University in Bloomington. From 1956 he worked at the Library of Congress in Washington D.C.

While living as an emigre, J. Balys compiled and published the multi-volume work titled A Treasury of Lithuanian Folklore; he also wrote folklore and ethnological articles for the Lithuanian Encyclopedia that was being published in Boston. Overall he published 34 books and over 600 articles. Almost all academics who cite J. Balys’s works that were published in Lithuania and across the Atlantic attest to the credibility of his data and research.

Once Lithuania regained independence, J. Balys never returned to his homeland, however his legacy and impact on the country’s culture and science were acknowledged and officially recognized: in 1994 he was awarded the National Jonas Basanavičius prise and in 1999 he was honored with the 4th class Order of the Lithuanian Grand Duke Gediminas. Between 1998–2004 the Institute of Lithuanian Literature and Folklore published five volumes of his Writings, compiled by Rita Repšienė.

J. Balys died on September 9th, 2011 at age 102, and is buried in the Monticello cemetery in Charlottesville, Virginia.

In 2009, as the Institute commemorated Jonas Balys’s centennial, his former co-worker, ethnologist Elena Bradūnaitė-Aglinskienė, told about a “Folklore Room” that he established and privately funded in Putnam in 1981 to safekeep his donated manuscripts, books, card catalogues and folklore materials. By 2013, in collaboration with the director of the Archive of Lithuanian Culture in America (Amerikos lietuvių kultūros archyvas, ALKA) in Putnam, CT, Dr. Mirga Girniuvienė, and her husband Dr. Ramūnas Girnius, the belongings of J. Balys were brought to Vilnius. According to M. Girniuvienė, Balys would have been delighted to know that his archive was kept safe in a place where researchers who are interested in his lifework and gathered materials will have access to them all. 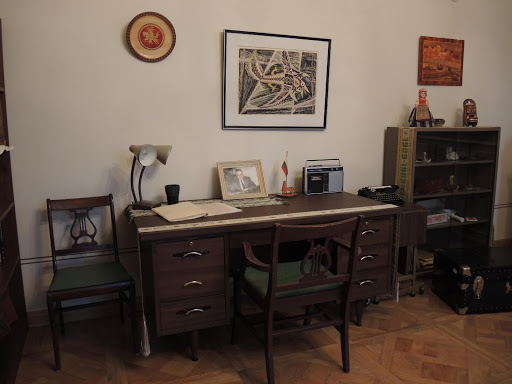 The exhibit of the “Folklore Room” presents J. Balys’s environment and activities at the time of his forced emigration and is composed of furniture, books, and a collection of periodicals (over 1200 items), manuscripts (61 folders), correspondences (180 files/folders) folklore manuscripts (12 collections), photographs (two albums), and various souvenirs. It is important to mention J. Balys’s magnetic tape recordings (54 items) as well. For the most part, they are copies of sound recordings made between 1949–1951 while visiting Lithuanians of the first wave of immigration living in America, and are supplemented by the journals of these expeditions. Together with his personal archive, a part of his soul also returned to Vilnius, which can be felt by touching the various things that once belonged to the researcher – his writing-desk and chairs where he spent many thoughtful hours, his consistently-clacking typewriter that produced many pages that later became books or articles, his cassette recorder that captured the folksongs that had been kept for decades in the hearts of Lithuanian emigrants and which were performed with tears in their eyes; colorful celebratory sashes with folk motifs, a well-worn travel bag. Especially heartwarming are crafted souvenirs decorated with Lithuanian folk symbols that were probably exchanged as gifts among Lithuanian-Americans or were bought in the annual Lithuanian crafts fair. They exude a longing for a lost homeland and include objects such as an amateur wooden carving of an Iron Wolf (a symbol of Vilnius city) with the tricolored Lithuanian flag, a beautiful doll made in America yet decorated with hand-woven traditional dress of Lithuania, or the Lithuanian coat of arms professionally carved into a lovely wooden plate.

A very different picture of Balys’s biography – one that was not frozen in set facts, but rather constantly bearing witness to misfortunes, disappointments, expectations, and joys –  emerged from handling his manuscripts and looking through his postcards, personal documents and photographs. Over ten of J. Balys’s passports and identification documents survived which bear witness about his identity recorded in Lithuanian, German, French and English languages. As he fled Lithuania in July of 1944, the journey must have been difficult for the young family since his wife, Elena Ručinskaitė-Balienė, who was from Raseiniai but had been studying French and Lithuanian languages at Vilnius University, had just given birth to their son Petras Gediminas a few months before, and their daughter Angelė Laima was only two years old at the time. Researchers of emigration history will also be interested in the Balys family “shipcard”, which allowed them to reach their hoped-for America, as well as the official certificate granting US citizenship to the family, which they must have awaited with great anxiety and hope.

The difference between the wealthy Western world and Lithuania’s position behind the “iron curtain” can be seen in the personal letters of relatives who requested packages of medicine and nicer materials for clothes to be sent to them. Two envelopes are “decorated” with abundant Soviet symbols, and the address is even written in Russian with the hopes that the Soviet surveillance would be more likely to “bless” such a letter on it’s way to America. These letters stand in stark contrast with postcards that were sent by members of the Balys family and colleagues vacationing in various countries around the world, accompanied by photographs of beautiful places and happy smiles. Greetings from J. Balys’s closest family – his daughter Angelė Laima and grandchildren – also wound up in the collection of personal correspondences. Unfortunately, the children and grandchildren of the Lithuanian patriot and upkeeper of Lithuanian culture wrote to their beloved father and grandfather only in English.

Probably the most valuable part of the received treasures are J. Balys’s personal and professional correspondences from 1945–1986. Researchers of culture, literature, and folklore history will be interested in his correspondences with renowned persons – Algirdas Julius Greimas, Marija Gimbutienė, Jurgis Gimbutas, Vytautas Kavolius, Mykolas Biržiška, Adolfas Šapoka, Jurgis Dovydaitis, Vladas Jakubėnas, Simas Sužiedėlis, Kazys Bradūnas, Jonas Aistis, Stasys Lozoraitis, Vytautas Žemkalnis, Pranciškus Giedgaudas, and many others. Herein are revealed the historical trajectories of the time, the aims of Lithuanian-Americans, especially that the US government wouldn’t recognize Lithuania’s incorporation into the Soviet Union as “voluntary”, and the differing perspectives of figures in the cultural and academic spheres about (non)collaboration with Soviet Lithuania. The letters of J. Balys (he kept not only those that he received, but also those that he sent) demonstrate his character as a principled researcher and uncompromising fighter for Lithuania’s freedom. Ever active, Balys worked a great deal for various Lithuanian organizations (in Chicago he was the director of the Lithuanian Institute, the vice president of the Supreme Committee for the Liberation of Lithuania (Vyriausias Lietuvos išlaisvinimo komitetas, VLIK), the editor in chief of the journal New Hope (Naujoji Viltis), and so on). He also supported Lithuanian publications and organizational activities with his personal funds. Perhaps the robustness of his character, and the defensive position guarding his own beliefs without a willingness to be silenced, led to the fact that Balys’s employment in leading positions of certain Lithuanian-American organizations was short lived. Due to his inflexibility, he would also wind up in unpleasant situations such as the conflict with M. Gimbutienė, that spread like wildfire through the press, as well as various conflicts with members of the liberal movement Santara, and the like. He was equally strict about the authenticity of the folklore that was being gathered (over which he got into an argument in the interwar period with Vincas Krėve-Mickevičius), and insisted that the research must be well-founded. This was true specifically of the research of Lithuanian folklorists, and especially of mythologists, whom he criticized for complex and arbitrary interpretations.