Jurgis Dovydaitis – the most famous folklore collector of the 20th century 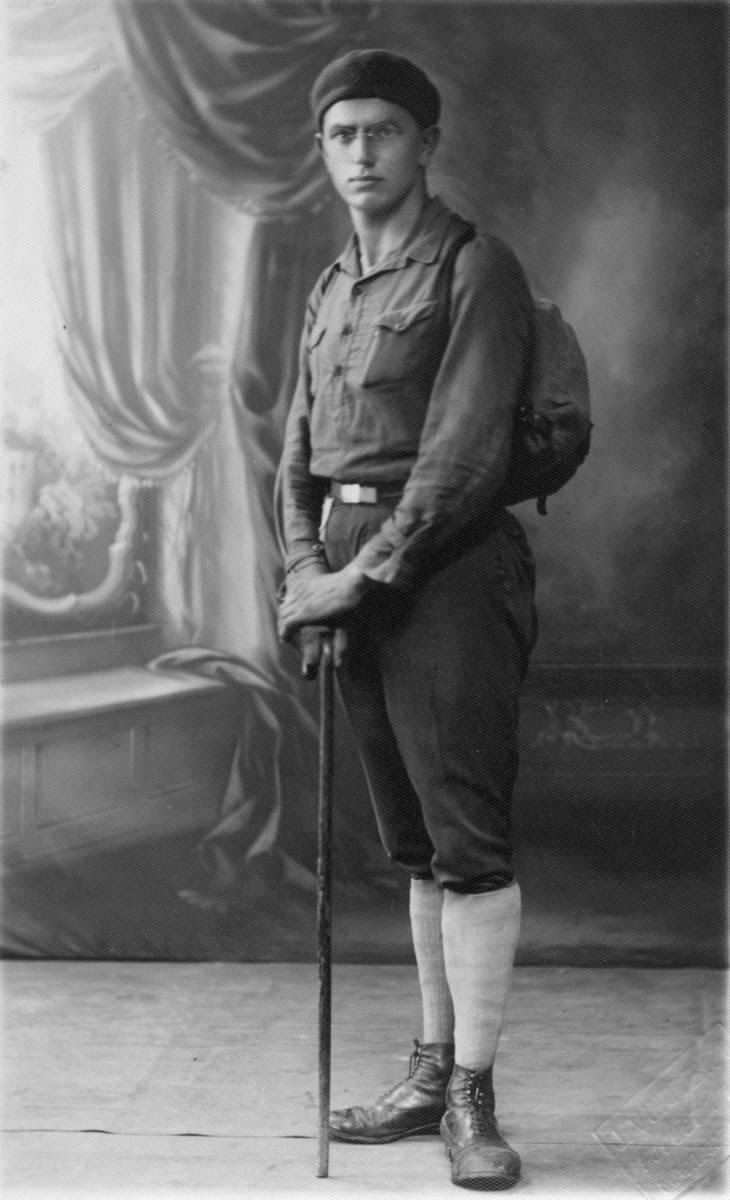 Photograph of the Open Air Museum of Lithuania (1928), LIMIS

Jurgis Dovydaitis was born on October 19, 1907 in Runkiai village in the region of Višakio Rūda, and died on August 25, 2001 in Vilnius. (His older brother, Pranas Dovydaitis, was a signatory of the Lithuanian Act of Independence in 1918 and a professor at Vytautas Magnus University). He devoted his entire life to local history and ethnography and gathered an especially abundant and valuable folklore collection, and added around 17,000 words to the card catalogue of the Lithuanian Language Dictionary. He became interested in folklore as a high school student, in 1924 he put together a folklore compilation of his home village, and in 1929 he shared his experiences in the booklet Tautosakos rinkėjo darbas (The Work of a Folklore Collector). In 1934 he began writing articles for the journal of local history Gimtasai kraštas (Homeland). Therein he described his travel impressions, the reality of Lithuania’s villages, his meetings and conversations with villagers, his chosen methodology, and his personal philosophy of travel:

“It seems as though the bumpy road, the constant novelty, and the discomfort should have exhausted us travellers. However, the mood of those who returned is completely the opposite. All of their eyes and faces are aglow with youthful energy. [...] The more you travelled, the more you experienced the beauty of the motherland. With every step you noticed how much effort was put in over the ages so that you could live. [...] You were happy-go-lucky, even though it was often the case that instead of a comfortable meal you had to make do with mere spring water and bread. [...] You soaked up the scenes of the roadside, your soul did not remain deaf to the people along the way who supported and cared for you.” (Kelionės reikšmė. Gimtasai kraštas, 1934, Nr. 3–4).

In 1935 J. Dovydaitis began his university studies and continued to collect folklore, which he sent to the Lithuaian Folklore Archive. He cherished Lithuania and actively spread  the importance of getting to know one’s homeland. Once the Soviet Union occupied Lithuania, his brother Pranas was deported in 1941 and then imprisoned in Sverdlovsk jail, then shot in 1942. Jurgis avoided repressions, however, it was necessary for him to transition from an enthusiastic ethnographer to a “quiet dissident”. During the years of occupation, he worked as a teacher and continued to teach and gather folklore (in 1960 he began using a magnetic tape recorder), and his ethnographic expeditions would last for several weeks.

According to Libertas Klimka, J. Dovydaitis “didn’t waste any time on expeditions, he was first to wake up and last to return. He wouldn’t wait to be driven to a village or homestead that was further away. Once other ethnographers would visit those distant spots they would find out that Dovydaitis had already been there. When he entered a homestead without much decorum or wordiness he would ask if anyone knew of any stories, songs, or other folklore – his old age allowed him to disregard the “etiquette of acquaintance”. He wouldn’t even pause for meals, and carried a cup around in his backpack. Without shyness he would ask for people to fill it with fresh milk. He would stay longer only with people he knew previously, usually exceptional informants. Carrying an enormous tape recorder, he walked all over Lithuania on foot, probably more than once…” (from the booklet Jurgiui Dovydaičiui – 100, Vilnius: LLTI, 2007).

J. Dovydaitis succeeded in coming across rare folklore works and little known folklore genres. One such genre was what he called “sung stories”, which were compiled in the book Lietuvių liaudies pasakos su dainuojamais intarpais (Lithuanian Folk Tales with Sung Inserts) in 1957, followed by a few more published compilations. His photographs are also a huge treasure: images of independent Lithuania were captured in his glass negatives (261 items), and scenes of post World War II were captured on film (800 negatives). In the photographs one can see lots of ethnographic details, houses, weavings, carvings, folk singers and narrators who were most often photographed beside their home standing either near the door or window, in the flower garden or orchard, or at the gates of the yard. 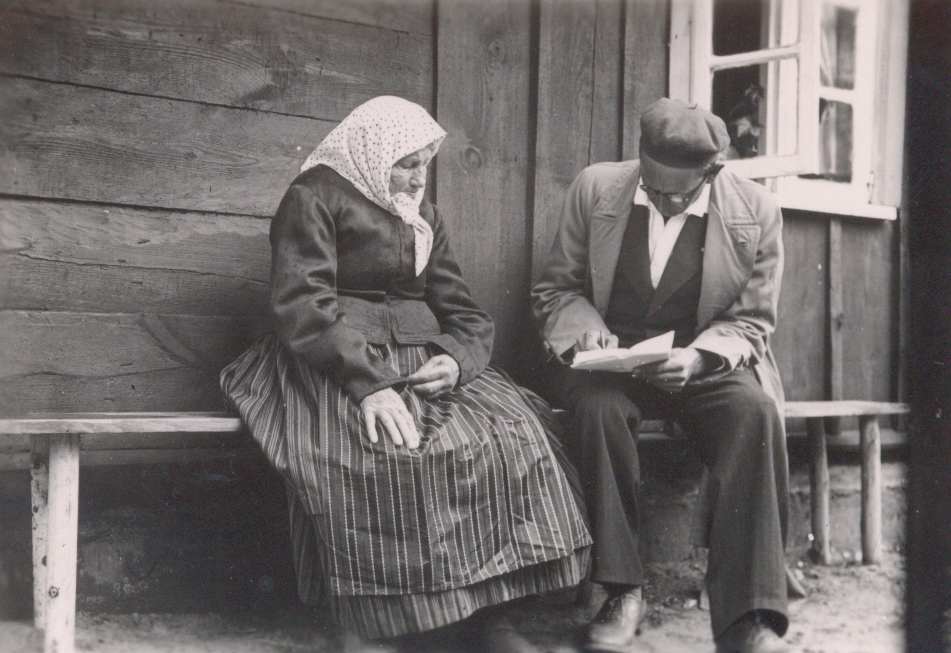 In 1998 J. Dovydaitis donated his entire personal folklore archive to the Lithuanian Folklore Archives at the Institute of Lithuanian Literature and Folklore, which included: 350 notebooks, 45 thematic collections dedicated to the folklore of particular places or regions (in total around 140,000 items of various genres of folklore), 1,243 magnetic tapes (on which were 106,500 folklore items), 800 photograph film rolls, a large bundle of song melodies transcribed by Bronius Uginčius, and other materials.

In 1991, J. Dovydaitis received the Matas Slančiauskas award, named after the collector of Northern Lithuanian folklore. At the time, Norbertas Vėlius admitted that “today one can certainly say that no one has done more for the sake of Lithuania’s local history and folklore than this honorable (and surely one can say) patriarch has done” (Liaudies kultūra, 1991, Nr. 2). In 1994 the folklorist’s work was recognized with the National Jonas Basanavičius Award, and in 1999 the director Algirdas Tarvydas commemorated J. Dovydaitis in the documentary film Palikimas (Legacy). In sending him on his final voyage, Irena Seliukaitė pointed out that “Jurgis will remain unsurpassed and unsurpassable as the collector of facts of our spiritual culture” (Liaudies kultūra, 2001, Nr. 5).

In 2007 the Institute of Lithuanian Literature and Folklore commemorated the most renowned folklore collector of the 20th century by celebrating his centennial. For this occasion the booklet "Jurgis Dovydaitis – 100. Lithuania’s life captured in manuscripts and photographs" was published. To honor his memory, the public library of Kazlų Rūda was named after him.