From the history of the archives

1907–1939
The origin of the Folklore Archives can be traced back to the activities of the Lithuanian Science Society (1907–1940), which was established in Vilnius. Its chairman, Dr. Jonas Basanavičius, together with other members, actively promoted the collection of folklore and attempted to amass the folklore materials that had already been collected in one place. Upon acquiring a phonograph, the Society produced early recordings of Lithuanian folk song melodies from 1908–1912. World War I and the Polish occupation of the Vilnius region (1920–1939) considerably subdued the activities of the Society, nevertheless, the collection of folklore continued. The collections of the Lithuanian Science Society include folklore manuscripts written by renowned Lithuanian writers and public figures such as J. Basanavičius, Simonas Daukantas, Antanas Baranauskas, Motiejus Valančius, Gabrielė Petkevičaitė-Bitė, Juozas Tumas-Vaižgantas, Laurynas Ivinskis, and others. Over the thirty years of its existence the Lithuanian Science Society amassed around 72,000 folklore documents. 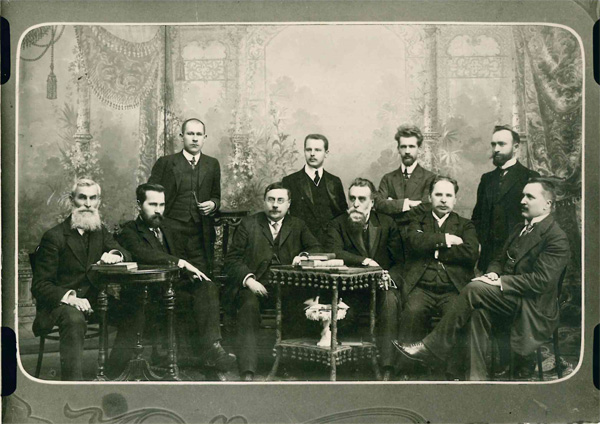 Because the archival collections of the Lithuanian Science Society remaining in occupied Vilnius were inaccessible to scholars from independent Lithuania, a group of prominent Lithuanian cultural figures, including Vincas Krėvė-Mickevičius, Balys Sruoga, and Mykolas Biržiška, established a Folklore Commission at the Faculty of Humanities at Kaunas University. From 1930–1935 this Commission officially oversaw the collection, management, and publication of folklore. Since the majority of folk songs were documented as verbal texts without melodies at the time, a Commission for Gathering Folk Melodies was established in 1934. Even though this Commission existed for only nine months, it acquired a stationary phonograph and began producing audio recordings of instrumental and vocal folk melodies on phonograph disks.
In 1935, both the Folklore Commission and the Commission for Gathering Folk Melodies merged to form the Lithuanian Folklore Archive (1935–1939). A young yet experienced folklorist, Dr. Jonas Balys, was appointed as its director. The Lithuanian Folklore Archive was a modern research center by the standards of the time, and was well equipped with facilities and qualified staff including Zenonas Slaviūnas, Jadvyga Čiurlionytė, and Juozas Jurga. The results of their work were published in the Archive’s academic periodical “Folklore Studies” (“Tautosakos darbai”). Through announcements in the press, a broad network of individual folklore collectors was established upon introducing financial reimbursement for collected materials. For this reason a record was reached in 1938 when the Archive received 80,000 recordings. Well-known informants (singers, musicians, and narrators) were invited to the Archive to record their repertoire on phonograph discs.
In 1939 the Lithuanian Folklore Archive merged with the newly established Institute of Lithuanian Studies. That same year, upon Lithuania reclaiming Vilnius, the Institute of Lithuanian Studies  was transferred to Vilnius where it received the collections of the Lithuanian Science Society.

Following the Soviet occupation of Lithuania, in 1941 the collections of the Lithuanian Folklore Archives and the Lithuanian Science Society were merged and placed under the provenance of the newly established Lithuanian Academy of Sciences at the Institute of Ethnography (after the war, at the Institute of History). All the archival funds comprised in total about half a million folklore items. In 1952, all of these contents were transferred to the Institute of Lithuanian Language and Literature, which was located in the historical building of the former Lithuanian Science Society.
During the years of Soviet occupation, folklorists’ research was limited by Marxist ideological constraints; ideologically unfit folklore was either discarded or else stored in a special collection with restricted access. In the postwar period the old, experienced staff of the archive came under pressure of ideological repressions and many were fired from their posts as workers of the folklore sector including Zenonas Slaviūnas, Jadvyga Čiurlionytė, Juozas Aidulis, Juozas Jurga and others. During expeditions not all genres of folklore were documented, since just by recording political jokes or songs of resistance fighters or deportees, one risked facing unpleasant consequences. On the contrary, folklorists were forced to collect “Soviet folklore”, or even encourage its creation. Up until the end of the 1950s, or even later, folklore was recorded by hand during expeditions. In 1958 the Institute acquired its first magnetic tape recorders, and the first magnetic tape recordings were made that year. At the end of the 1970s, audio cassette recorders were used during expeditions, and from 2000 onward digital sound recording technology was used.
Unable to work freely in the Soviet period, scholars focused mostly on projects related to systematizing folklore. In 1956, the Institute began compiling card file catalogues of folklore texts and melodies. Over the course of many years, the card catalogues of folk narratives, folksong texts and melodies, proverbs, and riddles were created. This formed the basis for the publication of seven books of the Lithuanian Folk Song Catalogue between 1970–1989 (compiled by Vanda Misevičienė, Bronė Kazlauskienė, Pranė Jokimaitienė and others), as well as for the publication of four volumes of spoken folklore from 1999–2009 (compiled by Bronislava Kerbelytė). 1980 marks the start of the publication of the foundational multi-volume song collection  „Lithuanian Folk Song Book“. By the start of the 21st century, collections of sayings, proverbs, stories, tales, riddles, and other genres were also being published. 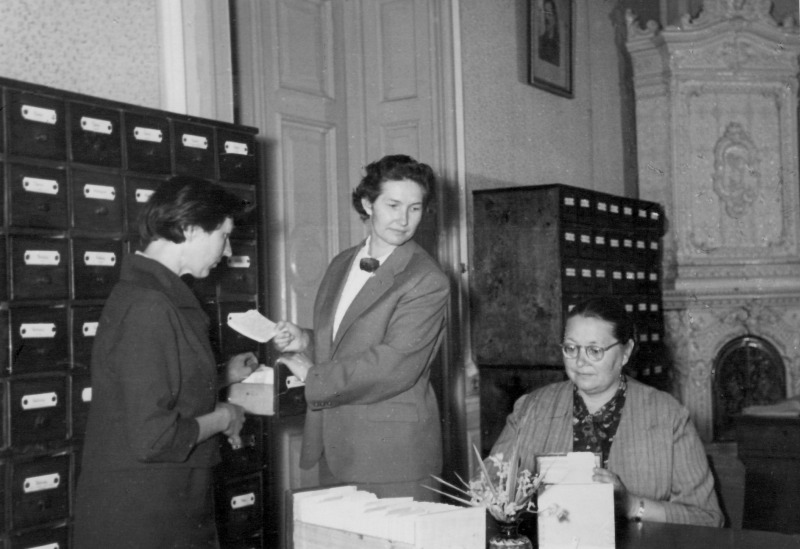 Once Lithuania regained independence in 1990, the Institute was divided into the Institute of Lithuanian Language and the Institute of Lithuanian Literature and Folklore. In the early years of independence, scholars began actively collecting previously prohibited folklore including songs of deportees and members of the national resistance, patriotic songs, political jokes and stories, and folklore reflecting Christian traditions. Attention was given to the folk life and creativity of all social classes, professions and age groups. It sparked an interest in how folklore was spread by means of modern communication, and folklore festivals taking place in cities and villages, commemorations of important dates for Lithuania, the movement of folklore groups, and other activities were documented.
Since then, the collections of the Lithuanian Folklore Archives were augmented by the acquisition of several large private collections of the famous folklorists Zenonas Slaviūnas (over 20,000 items) and Stasys Paliulis (over 15,000 items). The Juozas Būga audio collection of Lithuanian emigrant folklore (over 2,000 folklore items) was transferred from the USA. In 1998 the most famous folklorist Jurgis Dovydaitis gifted his collected folklore archive to the Institute (45 large thematic collections, 350 notebooks, 1,243 magnetic tapes on which were recorded over 100,000 folkloric items of various genres, 800 rolls of photo negatives, and melodies that were transcribed by Bronius Uginčius). The Archives also received the folklore collections compiled by students of the Vilnius Pedagogical University in 2003, comprising approximately 57,000 items. In 2010 Romas Kaunietis augmented the archive with cassette recordings of memories of people who took part in Lithuania’s struggle for independence after World War II, and in 2011 the Archives received the works of Ivan Maloglazov, a researcher and collector of folklore related to Orthodox culture. That same year, the Berlin Phonogram Archives, and later on, the Finnish Literature Society transferred copies of the oldest sound recordings of Lithuanian folklore preserved on phonograph cylinders. In 2013 the especially copious archive of Dr. Jonas Balys was brought back to the Institute of Lithuanian Literature and Folklore from the “ALKA” museum in Putnam, CT, USA. From 2014–2019 the Archives received folklore collections and sound and visual recordings from the archeologist Vykintas Vaitkevičius, painter Virginijus Kašinskas, ethnomusicologist Rimantas Sliužinskas, linguist Kazimieras Pakalka, historians Balys Juodzevičius and Valdas Striužas, and others.

Over the years, the accumulated folklore materials have been under the care of numerous folklorists working at the Folklore Archives Department. Of these, Klimas Viščinis and Povilas Krikščiūnas have served at the Archives the longest. Kostas Aleksynas, Ph.D., was the head of the Lithuanian Folklore Archives Department from 1994; Rūta Žarskienė, Ph.D. headed the Department from 2002–2017, and Austė Nakienė, Ph.D. has been the head of the Department since the second half of 2017. 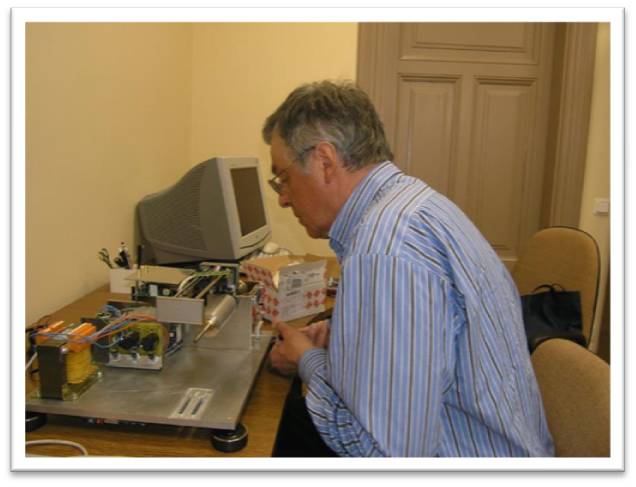 Franz Lechleitner from Vienna Phonogram Archive is transfering wax cylinders at the Institute of Lithuanian Literature and Folklore.
Photograph by Mindaugas Karčemarskas, 2006.
Challenges of the 21st Century: Digitization
In 1998, the department of Folklore Archives began creating the first database of sound recordings. Since 2001, a long-term program for the preservation and publication of the archived sound recordings is being implemented at the Institute of Lithuanian Literature and Folklore. With financial support granted by the Ministry of Culture of the Lithuanian Republic, the recordings from the old phonograph discs were digitized, and from 2003–2005 four publications representing this collection appeared and were supplemented by a  webpage. In 2006 archival sound recordings expert, Franz Lechleitner, was invited from the Vienna Phonogram Archive to help access the oldest sound documents of Lithuania - phonograph cylinders. This project culminated in the publication of a selection of the highest quality phonograph recordings in 2007 (see: Our publications) In 2008, the Lithuanian Folk Music Phonogram Collection (1908–1949) preserved at the Lithuanian Folklore Archives was included into the UNESCO "Memory of the World" national register as an object of documentary heritage of regional significance. Between 2009–2011 the restored old sound recordings of the archive were listed in the European digital library portal Europeana, and in 2012 all of the old archival recordings were entered into the  Folklore sound recordings database. Thanks to project funding from national and European Commission foundations, the Archives have been digitizing sound recordings from magnetic tapes. Currently around two thirds of the archival materials stored on analogue recordings have been digitized. They are made accessible to the public in the volumes of the Lithuanian Folk Song Book, other compilations of folklorists or informants, and are used in educational programs or repertoires of folklore groups and the like.

Manuscripts are in dire need of conservation and restoration as they make up the largest collection of the Lithuanian Folklore Archives. In the 1990s the Archives began making xerox-copies of the most worn-out and most frequently used manuscripts. In 2007, with support from the Lithuanian State Science and Studies Foundation, the Archives began scanning its oldest collection - the manuscripts of the Lithuanian Science Society and storing them in a newly created database. In 2010–2012 an ambitious digitization project was launched and resulted in the creation of the virtual collection of the manuscripts of the Lithuanian Science Society, and the instigation and continuous upgrading of the Lithuanian Folklore Archives database. Since 2012, folklore collections marked by the LTR signature are being digitized. This is the largest folklore manuscript fund in Lithuania, of which only a small portion has been digitized. Nevertheless, over 300 collections have already been made accessible on the internet, where one can browse them from one’s own computer.
Specialists have also given attention to the photo archives and video collection - a large portion of the photographs have been digitized as have all of the video recordings that were made on analogue videotapes. Old inventory books of the Archives have been transferred to the computer, and Excel format databases have been created. Descriptions of the digitized magnetic tapes and audio cassettes, as well as annotations of visual materials and other data, are constantly updated in the strategic Lithuanian Folklore Archives Database.

In response to requests of members of the folklore movement, the project of digitizing sutartinės (polyphonic songs that have become a folk symbol of Lithuania) and uploading them to the internet was executed from 2015–2016. The webpage www.sutartines.info was created in which four books were uploaded: three volumes of Zenonas Slaviūnas’s Sutartinės. Lithuanian Polyphonic Folksongs (1958–1959) and Stasys Paliulis’s compiled book Lithuanian Instrumental Folk Music. Wind Instruments (1959).

Today the Archive faces the challenge of gathering virtual works that circulate over the internet. By using technologies that are easily accessible to the majority, people willingly document their family gatherings and various community events, however, only a small fraction of all these recordings wind up in the archives. Methods for collecting ethnographic material from the internet are just beginning to take shape.
Rūta Žarskienė
Assist in describing a photograph or manuscript
Send recorded materials